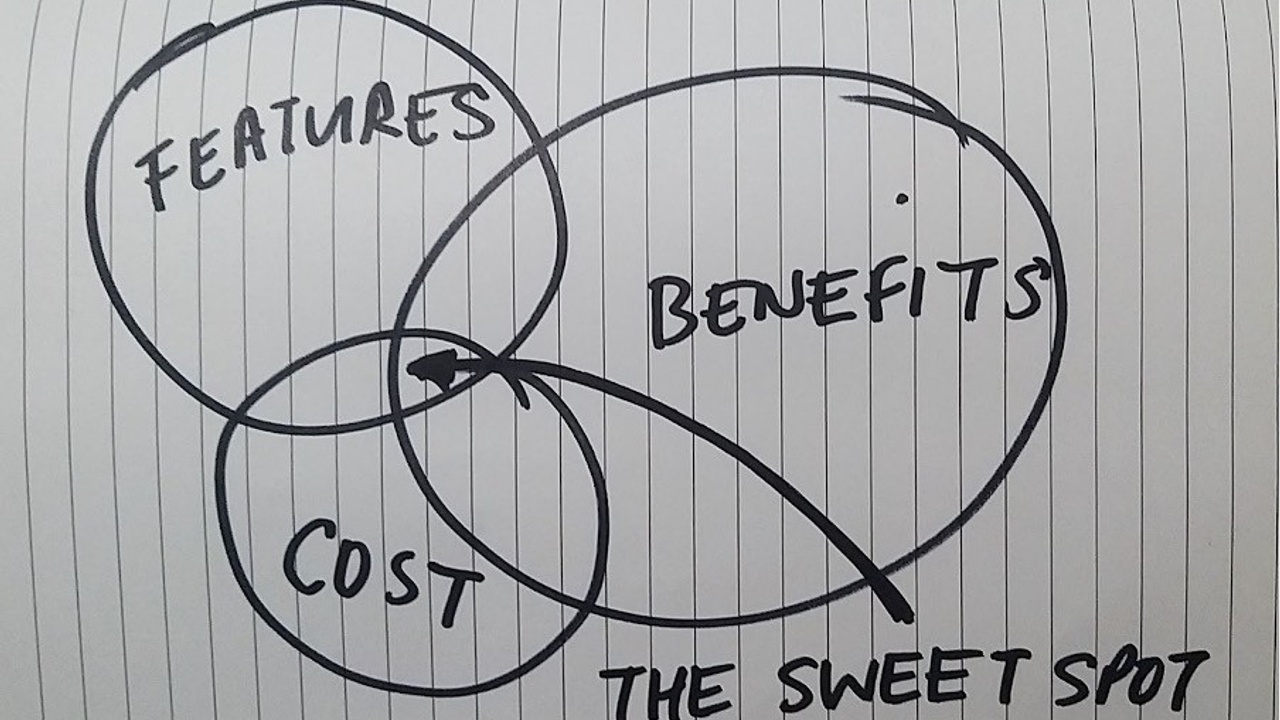 Every successful and long-lasting product or service has to find its sweet spot - the place where features, benefits and cost overlap to produce something viable. Let’s look at some examples:

Industrialist Henry Ford introduced his Model T automobile in 1908, and rapidly changed the world. His wasn’t the first car on the market, but within 10 years half of all cars on the roads of America were model Ts. The design was easy to operate and maintain, and the price was right. Cars were no longer the playthings of wealthy people, but provided a revolution in transport. By our modern standards the features were limited, but the benefits were massive compared to previous horse-drawn transport.

And so it goes for another ground-breaking invention, the ‘acoustic telegraph’ of Alexander Graham Bell. Today we know this device from 1876 as the telephone, which also helped massively change the world we live in. It’s the subject of jokes - how could the inventor have hoped for success when he possessed the only instrument in the world? But the ‘sweet spot’ of his device was so strong that uptake was rapid.

In more contemporary times, the rise of the computer has gone from a specialist instrument where there might be one in a whole business, to the situation where every business and home is equipped with multiple devices. We’ve gone from machines that do a few things quite slowly, through the interface of a fuzzy one-color screen, to laptops (and mobile phones) with massive computing power, and beautiful graphics. The sweet spot for computers shows a huge overlap between features, benefits, and costs.

All new successful products and services need the customers known as ‘early adopters’. These are the people who assess the features and benefits, and are prepared to accept the price, even for a completely new product. Maybe some buyers just want the latest mobile phone to show off to their friends, but most early adopters buy a product because they see the benefits, and there’s enough overlap with cost to make it worthwhile. We all make these calculations when buying new equipment where cost is an important factor. Are the features and benefits justified by the price? If so, we become an early adopter.

… As the laggards catch up

At the other end of the scale from early-adopters are the so-called ‘laggards’. These are the ‘wait and see’ people, who distrust new technology, and want to see a critical mass of other people using a product before being convinced. Back in the 1800s they’d be the people still posting letters rather than telephoning, or still hopping into a horse-drawn carriage in the 1900s. There’s nothing wrong with traditional methods of course, but there comes a point when even laggards are convinced by the sweet spot. We’re all now OK with using the ‘new-fangled’ electric light bulb, invented and marketed by Thomas Edison in 1879.
But let’s now turn specifically to the laser, and hair removal: Are you an early adopter, a laggard, or somewhere in between?

The first laser was built in 1960, ‘laser’ being a shortening of ‘light amplification by stimulated emission of radiation’. Technologists quickly saw opportunities to use the properties of lasers, which are now the basis for many innovations in medicine, industry and science. Lasers also quickly made their way into our homes, as the ‘engines’ of compact discs and DVDs. Early adopters of these loved the clean, clear sound and brilliant images available through the new media, and the technology took off because the cost overlap was good. In fact it was so good that soon even laggards were being converted, and by 2007 over 200 billion CDs had been sold worldwide.

… And 35 years of laser hair removal

The properties of lasers to remove hair were of interest to medical researchers from quite early on, but it wasn’t until 1986 that researchers Richard Rox Anderson and Melanie Grossman showed that it was practical. Their approach was approved by the FDA the following year, and since then the use of laser hair removal has steadily increased. Initially however there were serious downsides to treatments, which meant that the sweet spot was small. OK, laser hair removal with the early machines was sort of successful, but treatments were usually uncomfortable, and often even painful. There were also several skin types which couldn’t be treated, and hair removal was rarely permanent. Then load on the price: Early devices were very expensive to purchase, which was reflected in the cost of treatments. Even so, there were enough early adopters in the Spas and Salons of the USA to make laser hair removal a real service, with enough early adopting customers to guarantee some sort of market.

Today the market has grown hugely, and yet there are still concerns about how large the sweet spot is for laser hair removal. Owners of older devices recognize that they have high cost items which are not very effective or efficient, and which usually require a lifetime of costly consumables. Customers are also worried by stories of discomfort and pain, high treatment costs, and results which aren’t permanent. Yes, there are features and benefits, but are they justified when compared to other methods of depilation, long practised in the esthetics industry? Waxing, tweezing and even shaving are short-term ‘fixes’ that can even be done at home, so there are still many laggards who aren’t keen to jump into laser depilation.

That was then, but this is now, with very significant changes in recent years. The advent of new, more powerful diode lasers has led to a revolution in hair removal, and across the world one particular device has paved the way in over 70 countries. It’s the European-designed and manufactured Elysion Pro, which has created a sweet spot in the laser hair removal market that will turn everyone into early adopters. Whether you’re a business owner or a potential customer, treatments that are 4 x faster, more effective, and which is comfortable, mean that the sweet spot just got a whole lot bigger. Add in the fact that Elysion Pro is suitable for all types of skin, and that acquiring a device produces a Return On Investment which can be measured in months rather than the years taken by now-obsolete devices.
In the past many Salons and Spas felt that they had to offer laser hair removal services because there was a demand, but this was almost always a narrow margin or even loss-leading activity. Now with Elysion Pro, laser hair removal becomes highly profit generating because the technology is completely right for its time.

We’ve covered about 150 years in this short piece about early adopters, laggards and sweet spots. The point is that the introduction of some products and technologies is decisive and game changing. When the telephone, or the Model T, or the personal computer was created, the sweet spot for these was so obvious that there was no going back. Elysion Pro won’t change the world in quite the same way, but in the esthetics industry of America, it is setting the standard for high features and benefits, at affordable cost, with excellent profitability for owners.

Now that is surely hitting the sweet spot.